Goods transport Germany, transport from Germany and to Germany. We transport automotive and electrotechnical components, but we also 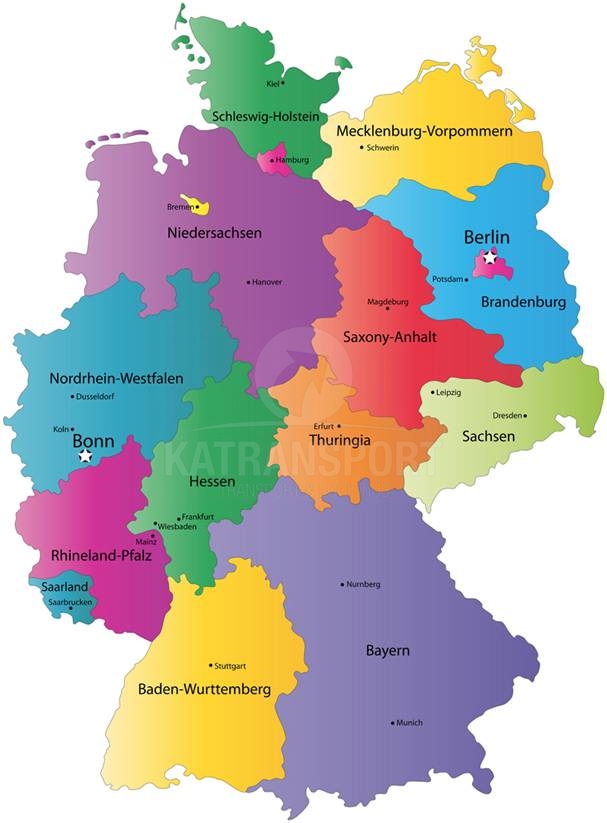 provide e.g. the transport of furniture and electronics. From Slovakia we also transport quality Slovak products to the ports, such as Hamburg and Bremen. They are transported to the whole world from there.

We take special care of each transport. We provide  express transport for manufacturing companies, whether they are small consignments of 1 to 10 Euro pallets and the weight of 1, 2 tons, or also truck transport (FTL) 34 pallets/24 tons.

Express transport of bigger amount of material is done in the mode with 2 drivers. We require an early announcement of transportation in such a case of transport.

Germany is relatively poor in raw materials. Its economy is focused especially on industry and services. Big areas of the country are used for agriculture. However only 2-3 % of all employees work in agriculture. Germany with its gross domestic product of 2.2 trillion Euro (situation in 2004) is the third biggest national economy in the world. Moreover, Germany is the biggest exporter in the world.

The standard of living expressed by Human Development Index puts Germany at 19th place of the world chart. According to the GDP per inhabitant Germany is at 11th place from the EU countries. German economy is nowadays characterized by a relatively low yoy economic growth (2003: -0.1 %, 2004: 1.6 %) and unusually high unemployment for Germany, especially in the Eastern Germany. The reason of these problems is especially stagnant domestic demand. On the contrary, Germany is very successful in foreign trade. It increased by 49 % between 2000 and 2004.

Unemployment has been continually growing since 70´s. The society does not agree on the reasons of the economic crisis: unions of entrepreneurs and neoliberal economists claim that the reason of the economic crisis is a traditional strong social state, because low costs on workforce in the neighbouring Eastern-European countries lead to the relocation of production. Opponents point out that other countries with a developed social state system such as Sweden, Finland, Norway, Austria achieved high economic growth.

A generally accepted reason is also the fact that state spending are financed not from taxes (which do not depend on a work position), but from social security contributions what makes the work positions more expensive, instead of taxes. Unions and critics of globalisation state arguments of Keynesian models and claim that domestic demand is weaker due to the cuts in social area.