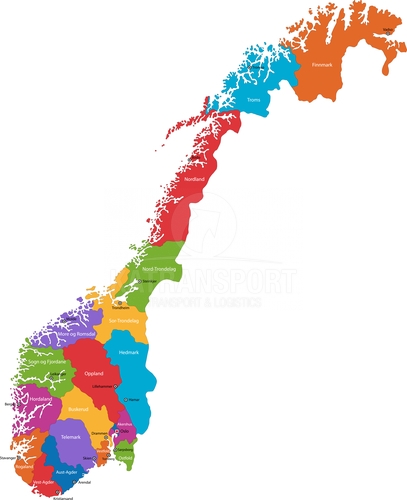 also provide e.g. the transport of cosmetics and wood.

In Norway there are 48 airports, 2 of them are international. The country has one of the biggest merchant fleets in the world. Rail transport is not so significant. Roads are mostly black topped. Tourism is a significant source of income.

Road tunnels for cars are much shorter. The longest one, which can be passed on four wheels, is the Norwegian Lærdal. You can drive a car in it for 24.5 km. It was built in only 5 years. They laid the foundation stone in 1995 and opened it in 2000. You will find it when going on E16 from Oslo to Bergeb. It is worth to get inside the tunnel due to aesthetic reasons, too. It is divided into 4 parts and separated by 3 natural caves which serve as a resting place or for recovery and distraction, since driving for 24 km in a dark tube may sound romantic, but it is a bigger burden for drivers than driving in a city.

Thanks to its 25 thousand km long coast Norway belongs to superpowers in the field of fishing and export of fish and various sea animals. The most important species of fish in Norway include Atlantic salmon, which forms unbelievable 94 % of all value of Norwegian fishing industry. Even though Norway started to catch salmons only at the beginning of 1970´s, nowadays it is proud to be the biggest exporter of the fish in the world. Thanks to the favourable position Norway produces approximately 1 million tons of salmon every year. It is more than 60 % of the total world production. It´s an interesting fact Norway exports salmons to approximately 100 countries in the world. For a longer time the main market has been in France.