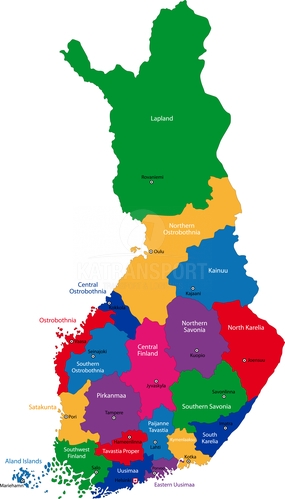 the transport of foodstuff.

Finland has a highly industrialized economy with free market. It produces approximately the same amount per person like the United Kingdom, France, Germany or Italy. There is a high standard of living in Finland. The key economic sector is industrial production, mainly wood and metal processing, mechanical engineering and the sector of telecommunications (e.g. Nokia company) and electronics. Trade is also very important. Almost one third of GDP is exported. Apart from wood and several raw materials, Finland is dependant on the import of raw materials, energy and some intermediate products of produced goods.

Did you know that?

Agriculture is self-sufficient in terms of basic products, even though it is limited by climate. Forestry is an important export source of income. A significant part of rural population is employed there.

The economic growth of Finland has been increasing by percents. Quickly expanding integration into Western Europe – Finland was one of 12 countries which adopted Euro in 1999 – will dominate Finnish economy in the following years.