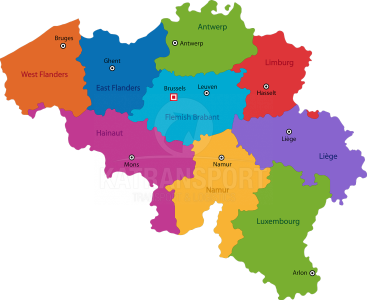 Goods transport Belgium. From Belgium we transport automotive components, but we also provide e.g. the transport of Belgium chocolate and other foodstuff.

Belgium is densely populated and it is situated in the middle of the most industrial regions of the world. Belgium was the first country of the continental Europe where the industrial revolution happened at the beginning of the 19th century. Mining and steel industry developed in the cities of Lieche and Charleroi. It flourished until the mid-20th century. However, after 1840 the textile industry in  Flanders underwent several crises followed by famine (1846 – 1850).

Chemical and petrochemical industry started to quickly develop after the WWII in Gent and Antwerp. Oil crisis in 1973-1979 caused the long recession of economy. It caused the regression of steel industry and therefore the economy development in Walloon Region slowed down.

The economic centre of the country moved to the North to Flanders in the 80´s and 90´s and nowadays the industry is concentrated there. The government debt reached 120 % of GDP at the end of 80´s. Despite of balanced budged of recent years the government debt represents 94 % of GDP (2005).

Belgium has an open economy. It has a quality infrastructure of ports, waterways, railways and highways which connects the country to the economies of its neighbours. Antwerp is the second biggest European port. Since it is one of the founding states of the European Union it supports the expansion of the powers of European institutions for a better interconnection of the economies of the member states. Belgium adopted Europe´s single currency EURO in 1999. It replaced Belgian franc in 2002. The economy of Belgium is strongly oriented to foreign trade, a part of it consists of goods with a high value added. It mainly imports foodstuff, apparatus, rough diamonds, oil and oil products, chemical products and textile. The most important export articles are cars, foodstuff, cut diamonds, iron, steel, textile, plastics and oil products.

Since 1992 Belgium and Luxembourg have been having a single market with customs and monetary union – Belgium-Luxembourg Economic Union. Its main business partners are The Netherlands, Germany, France, Great Britain and the USA. Belgium was at the 9th place of Human Development Index in 2005.