Goods transport Serbia, transport from Serbia and to Serbia. From Serbia we transport engineering components, but we also provide e.g. the 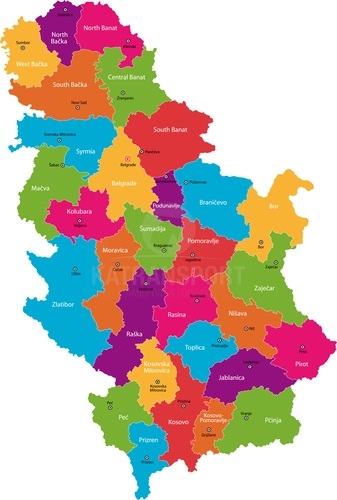 Nis – it is one of the oldest cities in Balkan. It was an important defensive city of Roman Empire (the original name is Naissus). Emperor Constantine was born here. His bronze bust is exhibited in the National Museum in Belgrade. The interesting sights in the city are the tower of skulls, which was built by Turks in the 19th century from the skulls of Serbian rebels and the Turkish fortress in the city centre. Nis is also the homeland of one of the oldest Serbian Christian churches. There is Palace Mediana close to the city. It was built in the memory of the emperor Constantine I. Great who brought Christian religion to the empire in the 4th century AD. The palace was used during the visits of emperors in Naissus. Palace Mediana is a lush building with a villa and thermal spa. Its interiors are decorated by numerous frescos and mosaics.

Yugoslavia was an underdeveloped agricultural country before the war. Agriculture produced approximately one half of pension, industry one third. Yugoslavian agriculture was extremely underdeveloped and very unsystematic. 1.7 million people died in the WWII and due to the bloody terror during the occupation. Material damage represented 9.1 billion. Working people in Yugoslavia were able to recover the economy destroyed by the was by the end of 1946. Yugoslavia has not still been able to get the level of economy it would have been if there had not been the war. The aim of the economic reform, which started in 1965, was to transform the extensive development of Yugoslavian economy to the intensive one. Serbia and Montenegro achieved spectacular results (approximately 10 % a year). 4.2 million inhabitants are employed in the economy. The republic has the developed engineering, energetic industry, metallurgy and chemical industry. Food industry dominates light industry. The processing of tobacco is important.