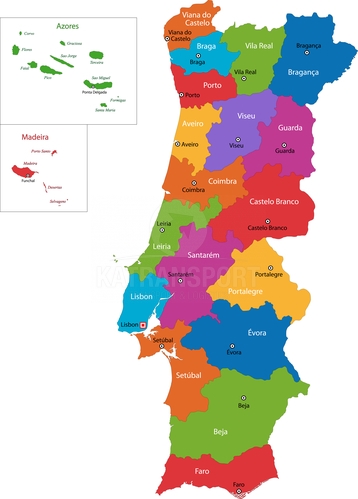 also provide e.g. the transport of port wine and textile.

Transport in Portugal is well developed and diversified. The country has 68,732 km of roads, approximately 3,000 of them are a part of the system of 44 highways. The continental Portugal with its area of 89,015 km2 has 3 international airports – Lisbon, Porto and Faro. The main ports are in Leixões, Aveiro, Figueira da Foz, Lisbon, Setúbal, Sines and Faro.

The city situated in the North of the country, in the wine region, is the second biggest city in Portugal and it is on UNESCO list. It looks modern, but you can find there ancient monuments or picturesque corners, too. The originally historical centre is protected by the walls from the 13th century. The most important and appreciated buildings are Stock Exchange Palace with (marble decorations, Torre dos Clérigos or Tower of Clerics, many museums (Museum of History of Medicine or Museum of Marine Zoology) and last but not least the Roman church of St. Francis and church Carmo which is decorated by the typical colourful tiles called azulejos. Nature lovers certainly appreciate the visit of the botanic garden in Porto.

Since the 13th century the capital and also the biggest city in Portugal lies in the Western part on the river Tejo. It was probably founded by Phoenicians in the 12th century BC. One of the most extraordinary building in this city is the monastery of the order of St. Jerome from the 16th century, which is built in so called manueline. It is situate in the quarter of Belém. Famous navigators Vasco da Gama and Louis de Camoes are buried there. Belem Tower is also built in the same style. It is a military fortress by the river Tejo. However, the local landmark is the Roman church Castelo de Saso Jorge, which is surrounded by Medieval alleys. This city of yellow trams and football is worth to visit.